Everything grows rounder and wider and weirder, and I sit here in the middle of it all and wonder who in the world you will turn out to be.-- Carrie Fisher
7 down.  Only 33 to go.  But (besides me) who's counting?  I'll spare you my whining and suffice it to say that I'm doing the same.  I felt good enough to workout yesterday so that was good, but then I fell asleep in the car on a 25 minute ride.

I took some gender quizzes on line just for fun.  The resounding result has been "It's a girl", but this is based on questions like how fast my leg hair is growing and if my feet are colder than normal.  One site, though, told me "Congratulations, you have a 40% chance of having a girl."  My first thought was, "And a 60% percent chance of having a goat?????"  The Chinese gender charts both said girl and they were accurate for Riley and Boo.  But I know this is all fun and games.

I've been eating slightly better.  I have to stop eating when I'm not really hungry though.  All these crazy nausea feelings are making me just want bread and crackers.  But, the kids right now are down for their naps, so I'll be sneaking in some shut eye too.  I swear I will be more engaging and much more interesting as soon as I have the energy for it.
Posted by Dana at 1:56 PM No comments:

Patience, Can't Wait Til I Get Some 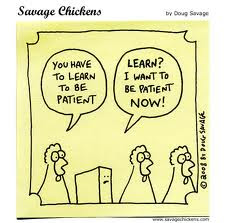 I recently saw a little quote (and you all know how I LOVE quotes) that said, "Life is not a journey, the journey is life."   I like that a lot.  But it still doesn't help with my patience.


I really do amaze myself though.  I find it remarkable that, considering the speed at which the last 4 years have flown by, June seems like it will never come.  I know it will.  After all, it comes every year!  A lot is going to happen over the next 9 months.  Thanksgiving, my little guy's 4th birthday, Christmas, New Years, baby girl's 3rd birthday, my nephew's 6th birthday, a trip to Mexico (where I'm sure I'll be looking like a beached albino whale), the Kentucky Derby, my birthday, Mother's Day, Father's Day, and then baby #3.  That's a lot to squeeze into 9 months and that's not even half of it!


I need to start planning.  Well, I've got plenty of time to plan though...  Maybe I'll go a florist to get some roses that I can stop and smell every once in a while.
Posted by Dana at 1:22 PM 1 comment:

Missing: My Energy and My Mind. Would Happily Take Either One Back 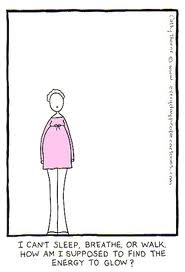 And I'm crying.  Over commercials, Biggest Loser and even the movie Evan Almighty.  Hubby has almost banned me from the TV.  I'm also craving BREAD, crackers, BREAD, pasta, and anything to do with carbs.  I'm trying to keep the carbs clean, but I miss last week's craving for spinach instead of bread!  Last week I was doing well with my workouts, this week, not so much.  We went for a walk over the weekend and I had a couple shooting pains in my abdomen so we shortened our walk and went home.  I felt better as soon as I sat down, but I'm 35, paranoid, pregnant and not taking any chances!


My energy is GONE.  It's a struggle right now to keep up with the kids.  I hope this passes soon.  I miss working out.  I did try a little workout this morning with hubby but made the mistake of doing it on an empty stomach.  Maybe tomorrow I'll try again after breakfast.


But, the kids are asleep right now for their naps so I'm going to be soon too!  Would love to know how anyone else out there fought pregnancy fatigue!!!!
Posted by Dana at 1:44 PM 2 comments:

If not for chocolate, there would be no need for control top pantyhose.  An entire garment industry would be devastated.  ~Author Unknown
I have refused to buy Halloween candy yet.  Especially Whoppers, Reece's Peanut Cups, Crunch Bars,  Kit-Kats, Hershey Kisses, York Peppermint Patties, Snickers, 3 Musketeers, or basically anything with chocolate.  Next to Hubby and my kiddos, chocolate is near and dear to my heart.  I can walk past any candy, chips, fried foods, cakes, doughnuts, cupcakes without hesitation, but, to quote Mr. T., I really do pity the fool that gets in my way when I'm on the prowl for chocolate.


Luckily, my baby cravings are of the healthier sort this time around.  I find myself preferring spinach to ice cream and corn salsa to Doritos, but I'm still loving those calorie and sugar rich honey, peanut butter and raisin sandwiches.  (Don't knock it til you try it, folks.)


However, I am hoping that I can maintain my course throughout this weekend and then send the supply of my favorites to Hubby's work and let those women enjoy.  (Helpful to me, definitely.  Somewhat diabolical to them, perhaps.)


Okay - here are some additional strategies from our friends at Mayo Clinic to help us avoid temptation!

Halloween unofficially marks the beginning of the holiday feasting season. And for anyone trying to watch his or her weight, the scariest part of Halloween is not ghosts and goblins but the ever-abundant Halloween candy. Sugar and mostly empty calories is what you get in candy, and the truth is that most of us don’t exercise enough to warrant those extra calories.
Those cute little fun-size candy bars seem harmless -- and they are, if you can limit your consumption. But that's easier said than done.
"All it takes is an additional 100 calories a day or the equivalent of one snack-sized chocolate bar and most adults will experience weight creep before they even know it," says Lona Sandon, MEd, RD, a spokeswoman for the American Dietetic Association.
When your cupboards are loaded with candy and the kids come home with bags full of even more treats, it's hard to resist. Many people try to lessen the temptation at home by bringing their extra candy into work, thus setting a high-calorie trap for their co-workers.  (oops...)

"Don’t get sucked into the 'see food diet' mentality that makes you want to eat the candy simply because you see it and not because you are hungry," says Brian Wansink, PhD, a Cornell researcher and author of Mindless Eating:  Why We Eat More Than We Think. "We eat more of visible foods because it causes us to think about it more, and every time you see the candy bowl you have to decide whether ... you want a piece of candy or not.
"Simply thinking of food can make you hungry, so when you see or smell something associated with food, like the shiny foil-wrapped Kisses, it can actually make you salivate."
But there are ways to keep your hands out of the candy jar so you can avoid packing on some extra pounds even before the holiday season starts. Here are 10 expert tips to help you avoid the temptation of Halloween goodies, at home and at the office.
Happy Halloween, all!
Stay safe and have fun!
Posted by Dana at 2:14 PM No comments:

I Get a Passenger on my Journey

You should never say anything to a woman that even remotely suggests that you think she's pregnant unless you can see an actual baby emerging from her at that moment.  ~Dave Barry, "Things That It Took Me 50 Years to Learn"
Well, I've been trying to avoid bread but I just found out there's a bun in the oven!  Hubby and I are very excited and so are grandparents.  It's very early.  5 weeks early.  Even though I have no reason to think this pregnancy will be anything but ordinary, I am 35 and just a little nervous.  My doc told me that I was perfect  to make babies at my last visit so that is some comfort though.


Now it's time to shift my focus - but only slightly.  Now more than ever nutrition is essential!  I must maintain a good weight.  I can't and won't let myself gain 65 or 75 pounds like my last 2 pregnancies.  I can't afford that at all.  But I won't sacrifice Baby's health by restricting calories either.  So, here's the deal....


We'll continue to learn about nutrition together and make the right choices, knocked up or not.  I'm going to continue to exercise but a little bit lower impact and I'll stay with the 3 pound weights.  I'm going to put a tracker with my weight gain and how far until D-Day.  Right now I'm at 138 and it's 243 days till the baby makes a grand entrance.


I would definitely appreciate any words of wisdom from mommies who have actually kept their weight in check during pregnancy and from those mommies over 35.  Thanks for your prayers and support!!!!
Posted by Dana at 9:04 AM 2 comments: 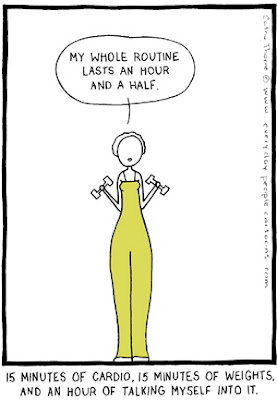 A man's health can be judged by which he takes two at a time - pills or stairs.  ~Joan Welsh

Over the weekend, I'd had a particularly long Saturday starting with a mound of laundry I didn't get to on Friday, a soccer game for my 3 year old, lunch with some friends, then back home to do more chores and try to finish my spring 2010 cleaning before winter.  I was beat and my 3 year old asked me when I was going to do my video.  I told him later several times and finally he said, "Mom, but you need to do your video!!!"


I wish I could tell you that I did, but it was already 8:30 by that point and I was running on fumes.  I could tell he was frustrated with me and the next morning when I did in fact do my video, he happily came downstairs to join me.  I feel bad that I let him down, but it cracks me up how important it is to him at 3 (well almost 4) years old that I work out.  I love it!


On another note, I took my measurements today.  I've lost 2 pounds and 3% body fat from a month ago.  I was hoping for better results but there were a few parties and celebration nights over the month.  But at least the numbers are moving in the right direction now!


My nutrition is definitely getting better.  I'm opting for more salads instead of sandwiches and more egg white omelettes instead of cereal.  It's going well.  And I'm a little surprised that since I took some of the urgency out and decided to enjoy the journey, I'm actually happier and doing better on my weight loss plan.  Yay me!


One day this week I do need to get my recipes uploaded.  I'd love to hear some of your favorites too.  And I do apologize for my repeated hiatus.  Sometimes life overtakes planning!

My Journey on a Healthy Pregnancy

I"m a Stay at Home Mom of 2 preschoolers plus bun #3 in the oven! Join me on my 9 month journey as I try to resist cravings for Dairy Queen Blizzards and peanut butter, honey, banana, and raisin sandwiches and opt for more nutritious choices. My goal is to keep my weight gain at a minimum while not sacrificing any healthy yummy good stuff for the bean on board!